Uber is an app-based transportation network and taxi company headquartered in San Francisco, California, which operates in cities in many countries. The company uses a smartphone application to receive ride requests and then sends these trip requests to their drivers. Customers use the app to request rides and track their reserved vehicle's location. 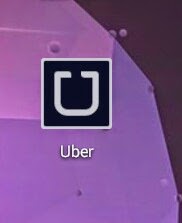 I used Uber for the first time when I attended Blogalicious(#BeGreatBe6) in San Antonio, TX in Nov of 2014. I drove Betsy Lou to San Antonio but since I was unfamiliar with the area I needed to find a way to and from the convention hotel and the landmarks in San Antonio. Taxis are really expensive so that was out of the question.
A fellow blogger from the convention suggested to try UBER.
I didn't know what it was...
I just had to try it!!

I loved it.
The first time I used it was to go see the Alamo:)

I downloaded the app, when I opened the app I had to sign up for an account. Took less than a minute to be up and running on UBER. Its very EASY, just click the app and the location services on my ipad told the driver exactly where I was at. You drag a pin in the app or input the address of where you need to go and "Bingo" within seconds you can see who your driver will be (with a picture) and what kind of car they are driving and also when they will be there to pick you up.
You can follow the car on the map in the app as they approach:)

You can also get an estimate of the cost of the ride before you order UBER.

I took UBER 9 times when I was in San Antonio.
I had the same driver for 7 of those rides!
He was very nice and friendly and his car was clean!
He knew where he was going and got me to the hotel and landmarks promptly.
I never had to wait more than 5 minutes for a driver to show up.

UBER works great on ipads and tablets!
You can download the app via the apple istore or the google app store.

The only downside I had was when I wanted to go back to my hotel from The Alamo. My ipad doesn't have wifi so I had to find a Starbucks to order the UBER ride. Luckily, there was a Starbucks right on the corner a block from the Alamo..lol, So it was really no biggie. He picked me up from the Starbucks within minutes. 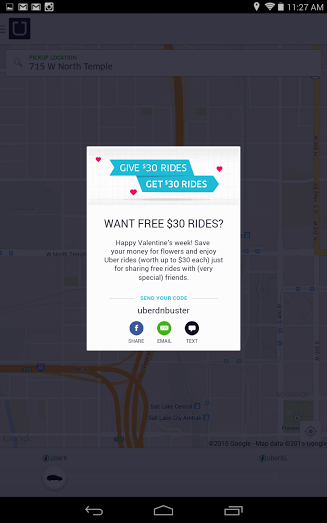 When you download the app enter my CODE UBERDNBUSTER to get your first ride FREE(up to $20)!! promo code is good for one year of date entered.

I am headed to another convention in UTAH soon and I will be using UBER to get around and see the sites and go back and forth to the convention hotel.

If You have not tried UBER you should! Its a great way to get around and it doesnt cost that much! Dont forget you get your first ride FREE up to $20!


Note: This post may contain a sponsored/affiliate/referral link. Thank you for supporting this site!
at 12:38 PM