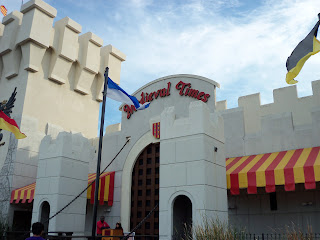 Medieval Times Dinner & Tournament is North America’s longest running dinner attraction.
It invites guests to travel back to the 11th Century. On Friday, November 18, it rolled out of a completely new show – the company’s first since 2007 and an upgraded menu. While the show offers many new elements, some traditions remain. The live show will still feature two- and four-legged performers with a utensil-free meal serviced in a castle-inspired arena.
The Dallas Medieval Times Dinner &; Tournament is the First of the Medieval Times To roll out the new show and menu!
Medieval Times~ Dallas, Texas
The Show

Almost two years in the making, the new live production presents audience favorites such as live jousting, swordplay, horsemanship and falconry.
Guests are taken back in time and encouraged to cheer for one of six “Knights of the Realm” named after historic regions of medieval Spain. 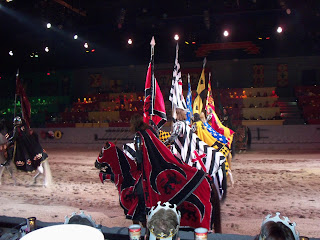 In addition to a new story, the production includes new lighting, choreography and battle scenes, costumes, new horse dressage elements, and a new soundtrack custom created for Medieval Times and recorded in Kiev, Ukraine.
After the opening, guests will witness intricate battles that are precisely planned sequences that have been practiced daily. With authentic weaponry and enhanced armor, the new production presents non-stop action tied to the tempo of the music. And while there’s still a general theme of “good versus evil” throughout the show, guests will see much more of what they like most about the show – fights scenes that maintain the highest quality and safety standards. 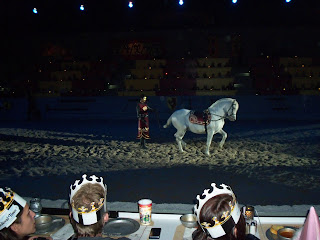 While almost all of the royal subjects at Medieval Times Dinner & Tournament stand on their own two feet, the most celebrated members of the Kingdom are best known for their trot, gallop and canter. Pure Spanish Horses, Quarter Horses, Friesians and Menorcan – from the Mediterranean island for which it is named – complete the mix of horses at each of Medieval Times’ nine North American Castles.
The Music
When audiences experience the new show debuting on Friday, November 18, at Medieval Times Dinner & Tournament, they may sense a familiar note behind every clash of swords. Award-winning IMAX and feature film score composter Daniel May provides all of the dramatic musical elements that complete the Castle experience.
The Feast
Guests will even enjoy an upgraded menu for the utensil free meal during the new show. 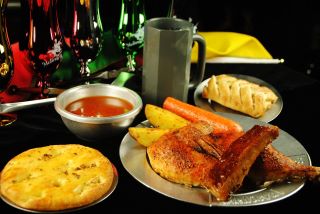 
Get Tickets
Guests can purchase tickets at the door, online at www.medievaltimes.com (check the website for a great deal on tickets at this time, you can take advantage of our Everyone Pays Kids Price promotion ($35.95 ++). There is also a deal online for a free Royalty upgrade!), or by calling 1-888-WE-JOUST.
For show times, visit www.medievaltimes.com
Guests also can find Medieval Times Dinner & Tournament on Facebook and Twitter.
~~~~~~~~~~~~~~~~~~~~~~~~~~
My family and I attended The Medieval Times Dinner & Tournament in Dallas, Texas on Saturday November 5th. We attended the 5pm show. This was an awesome family experience! We also had Royalty Tickets which Included:  Admission to the Show, Four- Course Feast, Upgraded Seating, Knights Cheering Banner (we did have to pay for the banner $1), Commemorative Program, and Behind the Scenes DVD!

We arrived about 5 minutes before the show started cuz traffic in the DFW area was horrid! Being that we were so late and had 2 extra people that wanted to come with us my family was divided into 2 different seating areas. My family (2 of us) were given the Black and White area and the other members of my group (5 of them) were given the Blue seating area. I loved that we were separated into different groups. We each had our own knight to cheer for!

When we arrived we were escorted to the check in area, that is where we found out that we could not all be seated together.  We then entered the next area that took our tickets and then gave us our crowns and our seating number! The 2 of us received a black and white crown and the rest of the group were given blue crowns. We were then escorted to a thrown for our entry pics. The blue group had their picture taken then my group had our picture taken. The Blue group ended up purchasing their entry photo as a souvenir of their trip to Medieval times. It was a great value to remember the night for only $20. After our pictures we entered the arena and were seated very quickly in the 2nd row of the black and white section. The rest of my family was seated in the first row of the blue section. We waved at each other because we were not close enough to chat with them.

At our seat, waiting for us to arrive was our plate, bowl, cup, commemorative program and a take home DVD of behind the scene of the tournament. The show began with in minutes of being seated.
The meal started quickly with the presentation of the "Dragons blood" soup, otherwise known as Tomato Bisque was served along with our drinks. The drink choices were Pepsi, tea or coffee. When the drinks and soup had been served the server came back thru with Focaccia Bread with Olive Oil and Seasoning.
While were enjoying the start of our meal the show was already getting under way with the introduction of the 6 knights. The next presentation was The Royal Falconer! The falcon flew all around and above our heads. That was neat to watch!

When The Royal Falconer finished his brilliant show the meal continued. Next came the HALF chicken! Yes, it was a complete half chicken and tasted so good! It was hard trying to concentrate on the show while enjoying the food..lol ~ The meal itself was wonderful all the way to the dessert of the apple turnover!

I have loads of pictures posted on my Gather blog that shows just a glimpse of our wonderful adventure at Medieval time~ you can view them here
I have over a dozen videos posted on my Youtube account~ you can view them here
~~~~~~~~~~~~~~~~
Disclosure~ I received 4 adult tickets with Royalty Package in exchange for my review on the NEW Dinner and Tournament at the Dallas, Texas Medieval Times. Thank you so much to Mrs. Johnson from Medieval Times and B2B for the opportunity! Thank you so much Ladies~ This was a real night to remember for the Family and I!
at 11:42 AM

I love Medieval Times. I can't wait to take my son there when he's old enough!


Came here from Mama on a Green Mission's blog hop. Please follow back!

I would LOVE to go to something like this - I'd like to see the horses and eat in that type of setting. Looks like a lot of fun!

I bet you had a great time participating in these kinds of festivals or celebration.

Looks like a lot of fun. I haven't been to one of these in years. This makes me want to go back.

Looks like a fun experience. Would love to go there someday.