This is part 2 of the Stroll N Roll 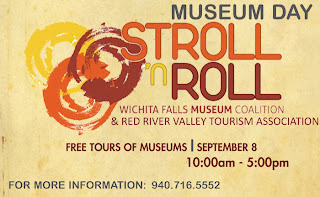 The 1st part was the Museum of North Texas

The Stroll N Roll is a yearly event put on by The City of Wichita Falls. We can visit all the local museums and art centers here in our town for FREE. The city also provides trolley rides to all the different places. This years Stroll N Roll had 10 different places we could visit and look around for FREE! This is a great family day and to learn more about our history!

This post is about one of the stops on the Stroll N Roll
The Wichita Falls RailRoad Museum!

THE WICHITA FALLS RAILROAD MUSEUM (WFRRM) a collection of 15 railroad rolling stock units, 8 motorcar units and memorabilia, much of it related to the railroads that served or are serving Wichita Falls.
The Museum's three-track yard is located on what was the site of the Wichita Falls Union Passenger Station. Click here for a view of the area.

LOCATION: The Museum's ENTRANCE gate is at the East end of 9th Street. The Museum is adjacent to the tracks of the Burlington Northern & Santa Fe Railway, in downtown Wichita Falls, Texas. Our street address is 500 9th Street.

~~~~~~~~~~~~~~~~~~~~~~~~~~~~~
HOW IT ALL STARTED
The actual founders of the museum were Dr. Forest Monahan, Dr. Theron Baber, Mr. Malcolm Vordenbaum, and Mr. R.E. Doc Waters. Dr. Monahan was the initiating and sustaining force during the founding years. They each contributed an initial $500 to start the process of incorporation.

A select few new members were invited to join the founders after about a year of slow going following incorporation. For lack of other identification, the term "Founding Member" was applied to the invitees. These people were a fortunate few. Dr. David Spencer, Lt Col Raul Ashby, Randy Duke, and Steve Reeves were the founding members.

At this time this organization was only a group of avid and dedicated Railroad Enthusiasts with visions of a Railroad Museum.
(........They built a museum.)
AS TIME PROGRESSED
The Wichita Falls Railroad Museum was founded in 1980 to establish a museum of railroad, streetcar, and pioneer history in Depot Square, part of an official National Register Historic District of downtown Wichita Falls, Texas. Chartered by the State of Texas as a non-profit corporation, the Museum was to obtain suitable rolling stock for the project, while the City of Wichita Falls would make available land in Depot Square, site of the former Wichita Falls Union Depot.

With practically no money and limited membership, the Museum's original plan to acquire Texas Zephyr cars proved unfeasible. The city eventually sold the Depot Square site to private individuals. In 1986 a project by several local railfans to repaint the city's deteriorating steam engine, then located in Rotary Park, renewed interest in the museum concept. Soon, a revitalized Museum began collecting rolling stock -- including diesel switcher 1029, donated by the Katy Railroad -- and the City repurchased Depot Square.

Raising enough capital to actually lay track remained difficult, however, and the Museum concentrated on collecting and restoring rolling stock at its temporary location in the Conoco complex on Eastside Drive. In November, 1990, when road work threatened to close off forever the Conoco spur, the Union Pacific and Burlington Northern railroads graciously moved the Museum's equipment to a siding adjacent to Lawrence Road. Here the Museum opened to the public for the first time. At least 2,000 people toured the Museum in its first year of operation.

But when, in August of 1991, it was learned that development would sever the rail to the Lawrence Road location, the Museum once again faced a search for a new home. Shortly thereafter, the Wichita County Heritage Society offered to help the Museum realize its long-term dream of establishing a permanent display in Depot Square. By the time the Museum's equipment was moved by Burlington Northern to temporary storage at the B. W. Sinclair plant east of the city, the "Move It or Lose It" campaign was in high gear. The Society obtained a ten-year lease of Depot Square and raised some $78,000 from individuals, businesses, foundations, and the City of Wichita Falls for construction of the Museum's three tracks and security fence. Construction was completed in late summer of 1992, and again with BN's help the Museum's equipment rolled into its permanent home.

The Depot Square site was dedicated on September 25, 1992, during the 5th annual "Zephyr Days" train festival. Since 1992 the celebration has included special tours and activities at the Depot Square Museum as well.

Now the Wichita Falls Railroad Museum once again focuses on preservation and restoration of the individual pieces in its unique collection and on improving its site. Since moving to Depot Square, the Museum has expanded its collection with the donation of two more passenger cars, several small work cars, and numerous railroad artifacts. In April of 1997 the Museum, assisted by the City and the Burlington Northern Santa Fe Railroad, moved the city's steam engine, Fort Worth and Denver No. 304, donated to the museum by the Rotary Club and City of Wichita Falls and moved from Rotary Park, near Cunningham school to the Depot Square site.

As always, the Museum's primary objective remains the creation of hands-on history lessons for the people of Wichita Falls and north Texas.
~~~~~~~~~~~~~~~~~~ 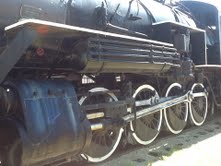 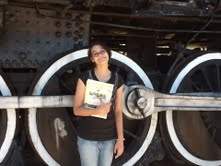 The kiddos got to ride the train cars around the museum area!
I rode it with Jessica this year:) 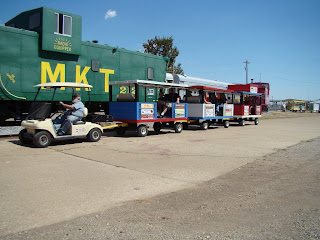 This is the engine to the big black train.. 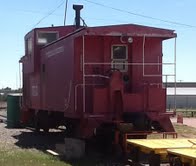 The way our mail was delivered! 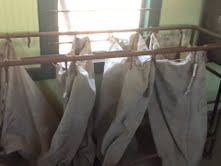 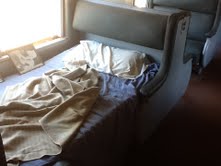 We had a great time and took some wonderful pics from the trip! 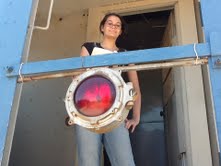 Thanks to the City of Wichita Falls for putting on such a great day!
at 4:55 PM