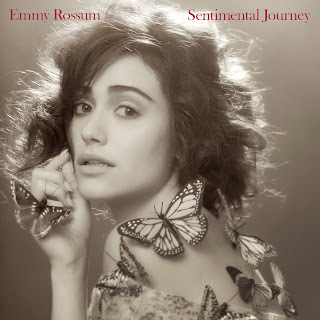 Sentimental Journey, releasing on January 29th,
is a collection of classic covers that takes us through the American Songbook.
On Sentimental Journey, the multi-talented actress and singer brings her stellar voice to songs popularized by some of the most beloved artists of the last century.
Emmy's 12-song 'passion project' is an emotional musical journey,
with each song representing a month in the year.

Sentimental Journey Track Listing:
"Each song needed to either lyrically or emotionally reflect the corresponding month," Emmy explained. "Some songs were obvious fits, like Summer Windfor June, and Pretty Paper for December. Others songs were less literal fits. I chose Nobody Knows You (When You're Down and Out) for September because, to me, the plaintive melody and lyric emotionally reflect the cold weather creeping in and the sense of melancholy we can get in the fall months."

Rossum is also an acclaimed actress who currently stars in the Showtime series Shameless with William H. Macy. She also stars alongside Emma Thompson and Viola Davis in the upcoming feature film Beautiful Creatures, which hits theaters on February 13th.

Album is available for purchase at iTunes and Amazon


My kiddos and  I rate this CD a 5 out of 5 stars. The kiddos sat and listened to the CD. My daughter called her friends over to listen to the CD! The girls loved it! Its easy to listen to.

update~ 1 week later~ The Girls still play the CD over and over! Its a great CD! The song I hear the most from my daughters room is "All I do is think of you". She asks me daily if the DVR is stil set for the 25th..lol

I participated in this campaign for One2One Network. I received a free copy of the CD to facilitate my review. By posting, I am eligible for incentives. All opinions stated are my own.
at 5:47 PM