Have you ever attended a Harlem Globetrotters game??

Your family's smiles will start before you even get to the game because this year, your family can vote at harlemglobetrotters.com, and decide rules for the game like two balls in play at the same time that could affect the final outcome.
~~~~~~~~~~~~~~~~~~~~
My family and I attended the January 29th game in Wichita Falls, Texas.
It was the first time that any of us had ever been to a Globetrotter game.

I was given 4 tickets as part of the Harlem Globetrotters Blogger Affiliate Program and I also won 2 tickets from a local radio station 92.9 KNIN from an instant win online contest the night before the game!:)
Thank goodness because I did not want to have to pick favorites among the kiddos) 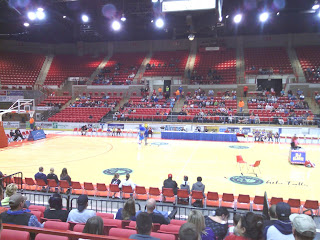 The laughs started as soon as we entered the coliseum!
We were all spaced out...lol
I had great seats that were only 5 rows from the court! The boys had seats that were way up there...Can ya see the grey and blue specs in the pictures??haha
There are no videos included in this post because no video cameras were allowed in the coliseum.
~~~~~~~~~~~~~~~~~~
The tour this year is "You Write the Rules". You can vote on your rules for your game.
The Rules of our game were the 4 point shot and double points.
The 4th period was the funniest with 2 balls in play. 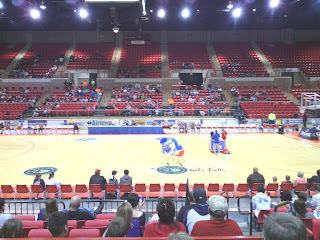 The pre game show was Globie and musical chairs.
There was a little dancing and alot of laughing!
I don't want to give to much away because you have to see a show for yourself!
You will be introduced to such characters as Globie, Globie 1/2 and Globie 2!
Globie 2's biggest trick was falling:)
You will also meet players named T-Time, Too Tall, Tiny and Special K.
The players kept doing tricks and stunts we have not seen at any other basketball game!

Its a Jam Packed show for ANY AND ALL ages!
My kiddos are teenagers and thought the show was funny!
And they dont find anything funny..LOL 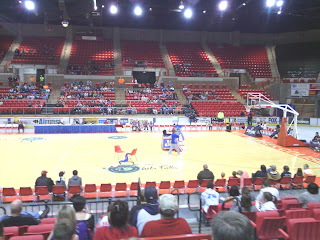 from the time Globie hit the court till the last buzzer, the game was full of
laughs and entertainment!
If you are looking for a FUN FAMILY TIME this is IT!
My kiddos and I all had a great time! 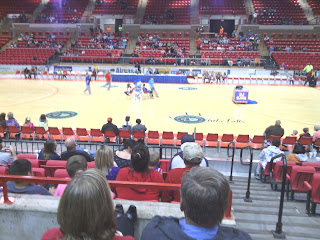 The game was fun and entertaining.
I could see the boys laughing
thru out the game! 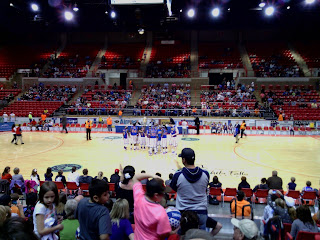 They even broke out into the YMCA in the middle of the game.
I will laugh for a long time when I remember my oldest son doing the YMCA..lol 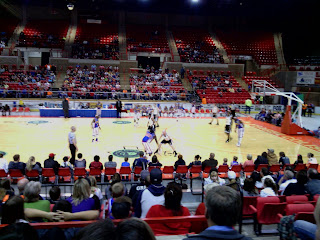 After all the fun and excitement~~
The Globetrotters won the game 101 to 99! 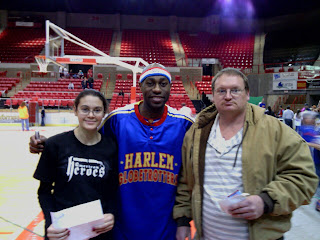 This is My Jessica and Uncle Jamie. 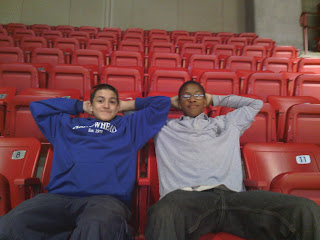 These are the boys~ don't ya love those seats..haha 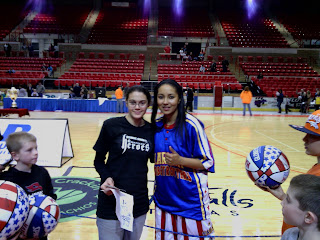 Jessica and T-Time. Jessica liked that there was a girl on the team:) 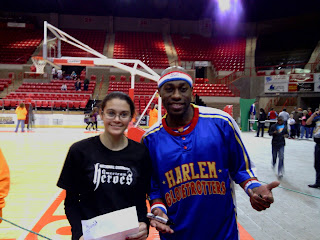 Jessica took my Harlem Globetrotters Blogger Affiliate Program letter to the game and had all the players autograph it. She got all the autographs but Globie's:( 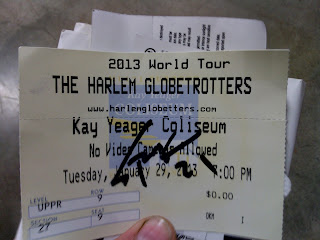 I want to say a HUGE thank you to Dylan from the Harlem Globetrotters Blogger Affiliate Program for the  quality time and the memories we will have from that night. The kids are still laugh about things from the game:)

disclosure~ This is a SPONSORED POST ~ I received 4 free tickets as part of the Globetrotter Blogger Affiliate program and won 2 tickets from 92.9 NIN in wichita Falls, Texas
at 9:38 AM

Looks like you had a great time! We are going on the 26th and the kids are SO excited! They have never been before, so it's going to be fun!

Thanks for sharing it seems like it's much fun, we have never been to a game.
Happy WW.

Saw the Harlem Globetrotters years ago, they are very entertaining, would love to see them again