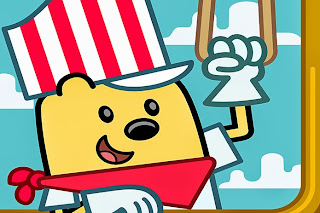 Enjoy another fun-filled story from Cupcake Digital, Parents' Choice 2013 Fun Stuff Award Winner, available now in English and Spanish! The company is committed to providing opportunities for exposing children to a new language with the option to switch from English to Spanish with the simple touch of a button. Wubbzy y El Tren Loco features a fun-filled story in which Wubbzy and his friends overcome silly and surprising obstacles when their train breaks down on its way to the Kooky Karnival.

Wubbzy y El Tren Loco features:
– Playful mini-games within the story and added learning games for practice of number, letter and sight word recognition.
– Professional narration of the same story in English and Spanish is a good introduction for initiating natural language acquisition.
– Individually highlighted words in the app are designed specifically for teaching the basics of spelling and vocabulary and can be used to practice Spanish.
– Three reading modes: Just a Book for quiet reading time, Read to Me and Read & Play.
– Spanish subtitles have been added to three original sing-along music videos from the popular Emmy (R) award-winning series.
– Coloring pages with scenes straight from the story.
– A Grown-Up’s Corner to guide parents, teachers and caregivers in discussing the story with kids. 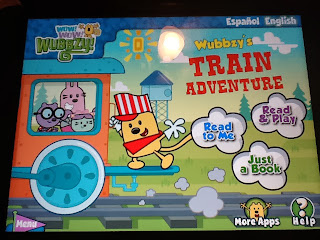 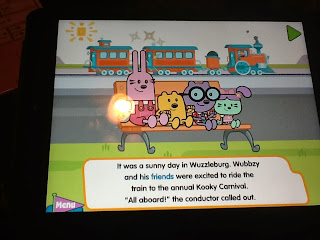 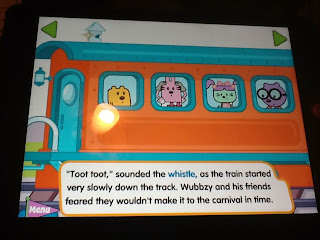 Cupcake Digital’s top-rated apps, Wubbzy’s Space Adventure (Wubbzy en una Aventura Espacial) as well as Wubbzy’s Dinosaur Adventure (La Aventura de Wubbzy y Los Dinosaurios), are already available in bilingual versions for purchase on the Apple App Store, Amazon, Google Play and the Barnes & Noble NOOK Store (TM). Wubbzy’s vibrant and exciting adventures in other deluxe story apps will soon be available in Spanish as well. Wubbzy and friends are also interacting with fans on Facebook as iWubbzy, iDaizy, iWidget and iWalden. For more information, visit http://www.cupcakedigital.com/apps-en-espanol/.
~~~~~~~~~~~~~~~~~~~~~
This is a cute app. I downloaded the Wubbzy y El Tren Loco App (Wubbzy’s Train Adventure), (based on the popular television series “Wow! Wow! Wubbzy!), and watched what happened. My kiddos played for hours with the app. There where so many things they could do with the app. They like the playful games  and the Spanish subtitles. Wubbzy y El Tren Loco is available for only $2.99 on the app store and on Amazon for android devices.
disclosure~ I received the app download in exchange for my review.
Note: This post may contain a sponsored/affiliate/referral link. Thank you for supporting this site!
at 2:49 PM