Glen Campbell's I'll Be Me Movie ~ Review and Soundtrack Giveaway

From the producer of “Walk the Line”… 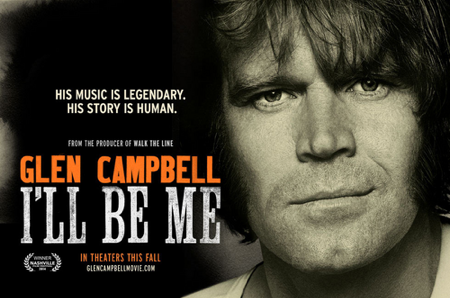 In 2011, when Glen Campbell was diagnosed with Alzheimer’s disease, he joined forces with his family to fight the biggest battle of his life. Glen and his wife, Kim, made history by going public with the diagnosis – the first time a major American celebrity would share this experience with the world. The Campbell family then embarked on a short “Goodbye Tour,” but the three-week engagement turned into an emotional and triumphant 151-show nationwide tour de force.

The film features those who know and love Glen, including Bruce Springsteen, Bill Clinton, The Edge, Paul McCartney, Jay Leno, Vince Gill, Jimmy Webb, Blake Shelton, Sheryl Crow, Keith Urban, Brad Paisley, Steve Martin, Chad Smith and Taylor Swift among many others. Rare vintage footage and extraordinary new performances of Glen’s most beloved hits immerse this moving cinematic account in the overwhelming talent of this humble family man. With joy and a tireless sense of humor, Glen and his family live each moment in the present while preparing for the future, all while playing their music to sold out venues on a star spangled voyage spanning the country from Carnegie Hall to the Hollywood Bowl.

The movie was hard to watch. I remember watching Glen Campbell when I was younger. The movie shows Cambell going to the dr and then following him doing shows and how Alzheimer’s disease is effecting him and his family. It is a great drama that shows the great bond between him and his wife Kim and how much they trully care for each other I'll Be Me shows just how much they would not give up against all odds. It is a wonderful and touching movie!

~~~~~~~~~~~~~~~~
Giveaway~ One Lucky winner of my blog will win 5 song EP soundtrack from the film
only valid in Canada & USA
enter via Rafflecopter form below
Giveaway ends 10/27 at 12AM CST
Only one entrant per mailing address, per giveaway. If you have won the same prize on another blog, you are not eligible to win it again. Winner is subject to eligibility verification
a Rafflecopter giveaway
"Disclosure (in accordance with the FTC’s 16 CFR, Part 255: “Guides Concerning the Use of Endorsements and Testimonials in Advertising”): Many thanks to Propeller Consulting, LLC for providing this prize for the giveaway. Choice of winners and opinions are 100% my own and NOT influenced by monetary compensation. I did receive a sample of the product in exchange for this review and post.
at 1:30 AM

I dont really know him but i will be hecking him out!

I like Rhinestone Cowboy. Thanks for the awesome giveaway.

I like "Rhinestone Cowboy" and "Ghost on the Canvas." kristiedonelson(at)gmail(dot)com Thank you.

I'm Not Gonna Miss You is the saddest but best song if you listen to the words.